To improve the quality of healthcare by providing up-to-date, objective genetic information to patients, providers, and healthcare organizations, supporting those in need of genetic services, and facilitating the adoption of best genetic practices.

We have a passion for genetics, and we are dedicated to our mission of providing objective information about genetic testing and how it impacts your health. Genetic testing technology is changing rapidly, and there are a growing number of genetic testing options available.

We’re here to help you sort through the wealth of information in this new age of genetics. Our goal is to provide objective expertise and information on the latest developments and guide you through the genetic health decision-making process.

The Genetic Support Foundation team members are experts in the field of genetics. Collectively, we have decades of experience in genetic counseling and medical genetics.

Genetic Support Foundation (GSF), a charitable nonprofit 501c3, is the result of a vision that our president and founder, Jon Wolff, MD, dreamed of throughout his lengthy career in medical genetics. Dr. Wolff’s passion for genetics and advances in the field, along with a deep appreciation for genetic counselors, led to the formation of the only nonprofit devoted to genetics.

On April 17, 2020, Dr. Jon Wolff passed away following a journey with esophageal cancer. Learn more about his life and legacy.

GSF has been serving clinics and patients in need of genetic counseling services since 2012.

Genetic Support Foundation really comes down to three main elements: genetics, decision-making, and you. These elements are reflected in our logo and help tell our story.

The DNA strand running through the middle of our logo highlights our core. GSF’s primary focus is genetics. We strive to be up-to-date on advances in genetics and genetic testing and bring that information to you.

Our depth of expertise and our objectivity set us apart from other leading online resources about genetics. You won’t find surface information — we dig deep. And unlike genetic testing companies, we are not selling you a product so we can be objective about the information we provide.

The arrow in the upper right corner of our logo reminds you that GSF’s goal is to provide you the objective information you need to make decisions that are right for your health and that of your family.

The DNA is surrounded by parts of circles and squares. Like in a family history chart, those parts of our logo represent the way that your unique genetic makeup is connected to your family and the way that genetic health requires a holistic approach to care.

Whether you are a patient, provider, or part of a healthcare organization, GSF is here to support you. 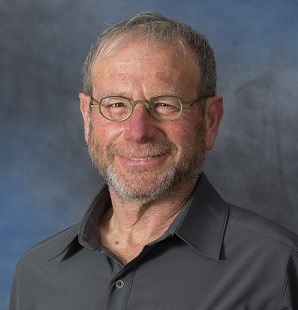 It is with a heavy heart that we share the sad news that Dr. Jon Wolff passed away following a journey with esophageal cancer. Jon founded Genetic Support Foundation (GSF) in 2012 and served as president and chairman of the board since that time. Recognizing a growing role of genetics in healthcare, Jon led the nonprofit’s mission in providing information, counseling and support to people regarding genetics and their health.

Jon led an incredible life and on April 17, 2020, was also blessed with a beautiful end of life; with his family by his side and love coming through the miles from his vast circle of friends.

Jon was a brilliant person, and he shared his knowledge as a mentor to many. He was an accomplished physician-scientist, philanthropist, and adventurer. He will be remembered for so many reasons including his dry wit, infectious grin, his zest for life, his integrity, and his remarkable devotion to his family and close friends. His caring spirit and love of learning was contagious. He was passionate about many things and seemed to always be delving into a new topic or activity, whether it was related to medical genetics, quantum physics, philosophy, art or nature.

Jon’s limitless curiosity and imagination is evident by his remarkable career. He received his undergraduate education in chemistry as a College Scholar at Cornell University in Ithaca, NY, and received his M.D. from The Johns Hopkins School of Medicine. He received his clinical training at the University of California-San Diego in Pediatrics and Medical Genetics. While in San Diego, he was also a post-doctoral fellow at the Agouron Institute, where he developed molecular dynamic computer simulations to aid rational drug design. In 1988, he became an Assistant Professor of Pediatrics and Medical Genetics at the University of Wisconsin-Madison School of Medicine and eventually achieved full professorship. He then went on to head the division of genetics and metabolism in Pediatrics for many years. He actively practiced as a metabolic geneticist until 2008 and thereafter remained on as Adjunct Professor, maintaining involvement in the genetic counseling education there.

As a physician-scientist, he published several clinical studies describing diagnostic and therapeutic advances that have become the standard-of-care for several genetic disorders. He has also served as Advisor on the State of Wisconsin’s Newborn Screening Program, which has spearheaded innovative programs for detecting metabolic disorders and cystic fibrosis in newborns.

Jon was one of the pioneers in the early stages of gene therapy back in the 1980s, playing an important role in developing gene therapy for liver and brain disorders. Subsequently, he has played a leading role in the development of techniques to transfer genes and nucleic acids into cells using physical and chemical methods. Internationally known, Jon had over 150 scientific publications and 80 patents. He served on the NIH-RAC, as a board member of the American Society of Gene Therapy (ASGT), on the editorial board of several gene/siRNA therapy journals, and as a scientific advisor to the French Muscular Dystrophy Association (AFM).

In 1995, he and his colleagues founded Mirus Bio Corporation. At Mirus he led a team that developed dynamic polyconjugates (DPCs), a new type of nanotechnology for transferring siRNA into cells of the body. The therapeutics division of Mirus Bio was acquired by Roche to form Roche Madison in October 2008, and this division was subsequently acquired by Arrowhead Research Corporation.

In 2012, when Jon founded GSF, it was because he recognized the gap in translating genetic information and understanding to patients, the lack of support for under-served populations, and a need to model ethical genetic counseling practices. His unwavering dedication has come to fruition in many ways through GSF’s work, including gaining 501(c)(3) nonprofit status in 2014.

In 2015, GSF released a comprehensive educational website, one that is informative and free from any bias or industry marketing to sell genetic tests. Also, in 2015, GSF released an independently produced video about noninvasive prenatal screening, and through partnerships with others, GSF has expanded its video library to include several educational videos, available in three languages. The following year, GSF extended its genetic counseling staff to be able to provide genetic counseling services through partnerships with many clinics and through telehealth throughout the country. In 2018, Jon published an important commentary on the commercialization of genetic testing and the future of the genetic counseling profession. In the last two years, GSF has continued to partner with a variety of clinics, healthcare organizations, and to offer financial assistance to those who need it most.

Much of this work was inspired not only by Jon’s passion and foresight, but also in the framework of the foundation’s logo, which was also Jon’s invention. First sketched by Jon on a piece of paper at a coffee shop meeting with founding Executive Director, Heidi Lindh in 2013, the logo elements represent genetics, decision-making, and the people GSF cares for.

In a recent exchange between Heidi and current Executive Director, Katie Stoll, the two reminisced about a quote that inspired Jon in the beginning stages of founding GSF: “To accomplish great things, we must not only act, but also dream; not only plan, but also believe.” -Anatole France

This inspirational quote serves us all at GSF as we move toward a future without Jon’s physical presence, and the following words from Jon himself will serve as a sounding board as we continue to grow in unique and innovative ways.

The vision for GSF in Jon’s words: “Provide unbiased, expert and compassionate care for patients. Be innovative. Be supportive of genetic counselors.”

Jon has been the heart and soul of this organization and his legacy will be carried forward through our work with his vision leading the way.

-From all of us at GSF

Genetic Support Foundation (GSF) is an independent nonprofit organization led by genetic counselors. We aspire to elevate the profession to allow each of us to meet our personal and professional potential. GSF is seeking mission-driven, passionate, genetic counselors who are willing to think and work “outside of the box” with the goal of developing innovative ways to deliver genetic services.

We are currently recruiting for a Genetic Counselor (Full-Time, Exempt)

Diversity is a core value of Genetic Support Foundation. We are committed to building and sustaining an inclusive and equitable environment.